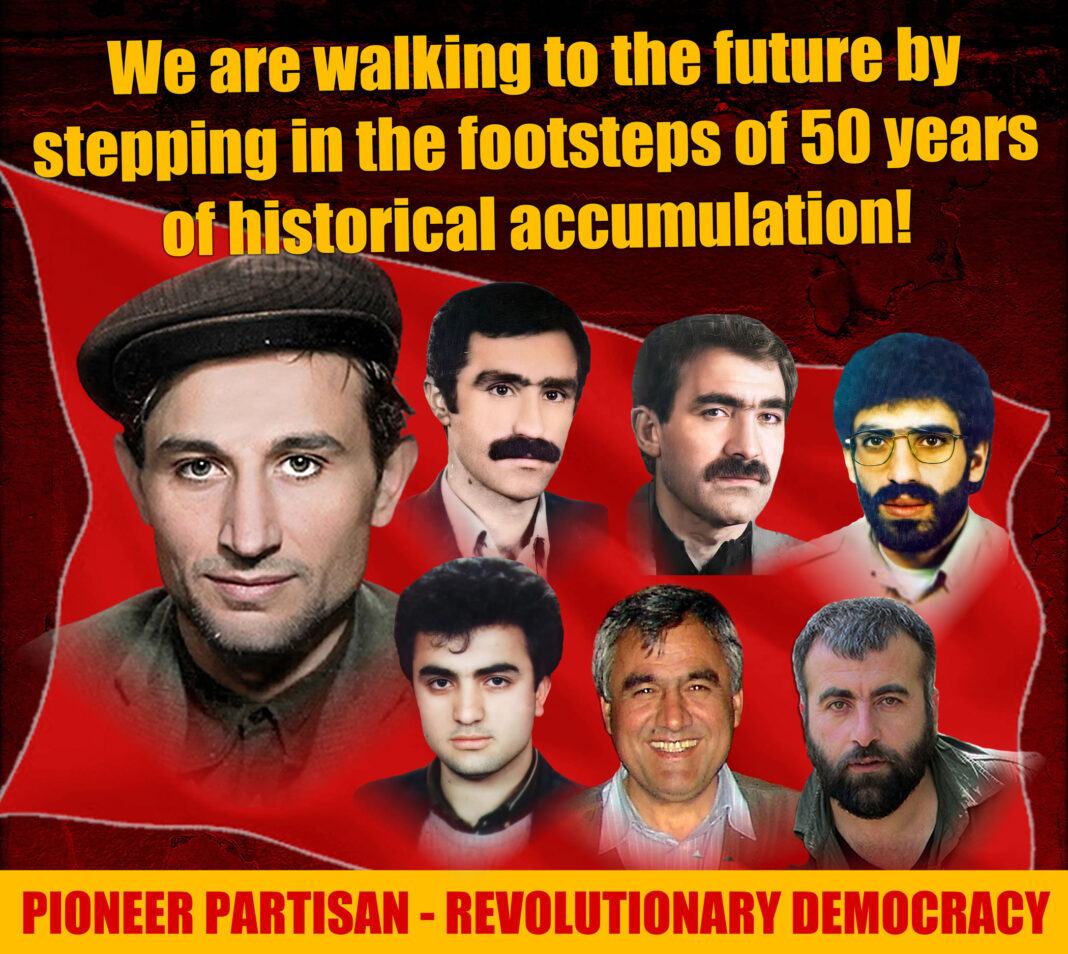 As the flag bearers of this glorious fight, the poem of resistence, which started centuries ago and aimed to erase the servitude of human to man from the face of the earth, we are witnessing the half-century-long historical period of our march. As a result of great sacrifices and costs, the 50-year political struggle line of our tradition has created a remarkable position in the eyes of friends and enemies. This position where the red flag which carries the color of the communist world dream is waving, continues its insistence in the struggle for revolution and continues its historical adventure as a gain of the oppressed and exploited masses. This breakthrough is the clear address of a radical separation from the entire value system of the established order and the establishment of a communist direction. This deep-rooted stance, wanted to be suffocated and destroyed, to be stopped by various obstacles, is our key to win bright tomorrows. This will, steeled on the edge of a knife, among the hot lava, through bloody ambushes, will continue to travel with the guidance of the stars, even if it stays in the darkest corridors. Those stars are our founding leader İbrahim Kaypakkaya and many of our heroic comrades who followed him. As the current successors of this red route drawn with their blood, we have a justified honor, but we are aware of our duties and responsibilities.

What suits us is to speak with the voice of the truth. It suits us to speak with the voice of the truth. In the course of half a century of organizational struggle, we paid a very serious price and created important values. We had our mistakes as well as our rights. We are far from where we should be. This historical accumulation, this Partisan story is our identity, it belongs to us. This is our story. We are followers of a culture of resistance that has persistently made it a habit to “continue where it left off”. We managed to stand up and fight with the enemy yesterday, we will succeed today. Triumph and defeat are inevitable phases in the natural course of class struggle. We have the courage, the accumulation and the history to overcome the ruptures experienced due to the given situation As long as we ask, as long as we dare. As long as we insist on the line of tradition that gives trust to the friend and fear to the enemy.

On the occasion of our 50th anniversary, the effort of all our comrades who have shouldered and contributed to this historical march is our badge of honor.

We respectfully commemorate the values ​​we lost in the struggle, and salute our veteran and imprisoned comrades, the true owners of our movement; the traditional mass. We wish success to our friends with whom we formed alliances at certain historical stages and with whom we fought shoulder to shoulder in the trenches of resistance. Our promise of victory to our values, which have been immortalized in the march of revolution, socialism and communism remains. We will march together to victory.